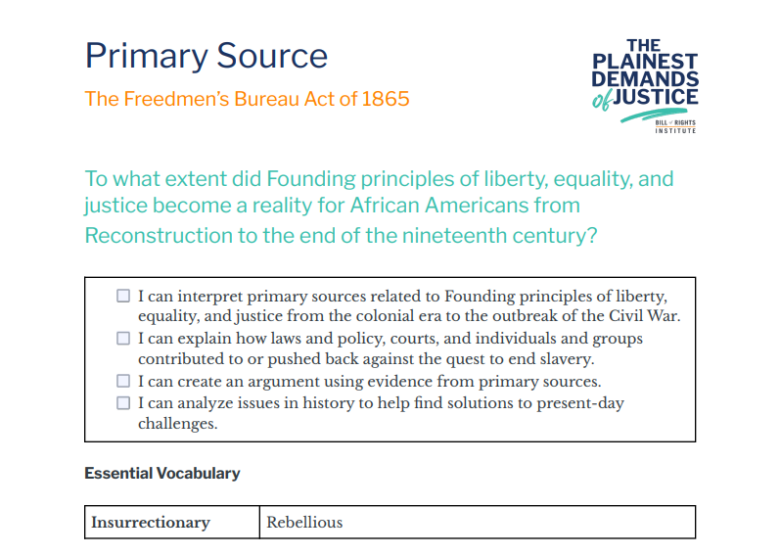 After emancipation, the Freedmen’s Bureau was created to provide assistance to those made destitute by the war—both Black and white. “An Act to establish a Bureau for the Relief of Freedmen and Refugees” was signed into law by President Abraham Lincoln on March 3, 1865. The Freedmen’s Bureau Act of 1866 extended the work of the agency for 2 more years and was passed over President Andrew Johnson’s veto. The agency provided necessities for those impoverished by the war and had initial success in resettling Blacks on lands confiscated during the conflict. The Bureau’s greatest success, however, was in education. Before federal funding stopped in 1870, it had established nearly 3,000 schools for African Americans and several colleges.

Be it enacted by the Senate and House of . . . That there is hereby established in the War Department, to continue during the present war of rebellion, and for one year thereafter, a bureau of refugees, freedmen, and abandoned lands, to which shall be committed, as hereinafter provided, the supervision and management of all abandoned lands, and the control of all subjects relating to refugees and freedmen from rebel states . . .

SEC. 2. And be it further enacted, That the Secretary of War may direct such issues of provisions, clothing, and fuel, as he may deem needful for the immediate and temporary shelter and supply of destitute and suffering refugees and freedmen and their wives and children. . . .

SEC. 4. And be it further enacted, That the commissioner, under the direction of the President, shall have authority to set apart, for the use of loyal refugees and freedmen, such tracts of land within the insurrectionary [rebellious] states as shall have been abandoned, or to which the United States shall have acquired title by confiscation or sale, or otherwise, and to every male citizen, whether refugee or freedman, as aforesaid, there shall be assigned not more than forty acres of such land, and the person to whom it was so assigned shall be protected in the use and enjoyment of the land for the term of three years. . . . At the end of said term, or at any time during said term, the occupants of any parcels so assigned may purchase the land and receive such title thereto as the United States can convey. . . .