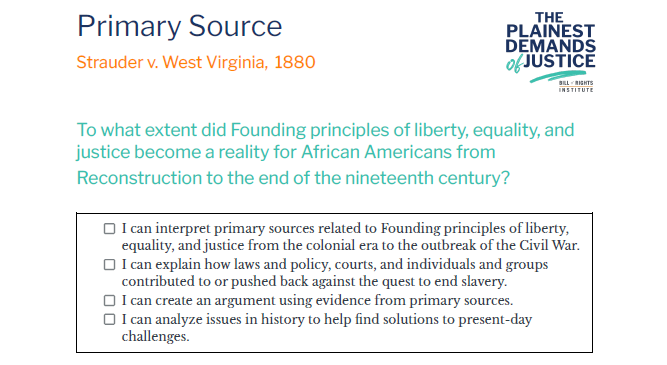 Trial by a jury of one’s peers has been an essential right of the accused since the Magna Carta was signed in Britain in 1215. The Founders included the right to trial by jury as a constitutional right of the due process of law in criminal prosecutions, and as a limit on government. Just as an accused person enjoys the right to a jury trial, citizens have the right to serve on juries to judge their peers in trials. In the South after the Civil War, Black Americans were barred from serving on juries in most places. The denial of this civil right resulted in unequal justice for Black Americans, because all-white juries usually returned favorable verdicts for whites accused of crimes against Blacks and decided against Blacks in trials. In Strauder v. West Virginia, 1880, the Supreme Court held by a 7-2 majority that denying Blacks the right to serve on juries was a violation of the Equal Protection Clause of the Fourteenth Amendment.

. . . the Fourteenth Amendment . . . was designed to assure to the colored race the enjoyment of all the civil rights that, under the law, are enjoyed by white persons. It not only gave citizenship and the privileges of citizenship to persons of color, but it denied to any State the power to withhold from them the equal protection of the laws. . . .

What is this but declaring that the law in the States shall be the same for the black as for the white; that all persons, whether colored or white, shall stand equal before the laws of the States, and, in regard to the colored race,  for whose protection the amendment was primarily designed, that no discrimination shall be made against them bar law because of their color? . . .

The very fact that colored people are singled out and expressly denied by a statute all right to participate in the administration of the law as jurors because of their color, though they are citizens and may be in other respects fully qualified, is practically a brand [an identifying mark] upon them affixed by the law, an assertion of their inferiority, and a stimulant to that race prejudice which is an impediment [a hindrance] to securing to individuals of the race that equal justice which the law aims to secure to all others. . . .