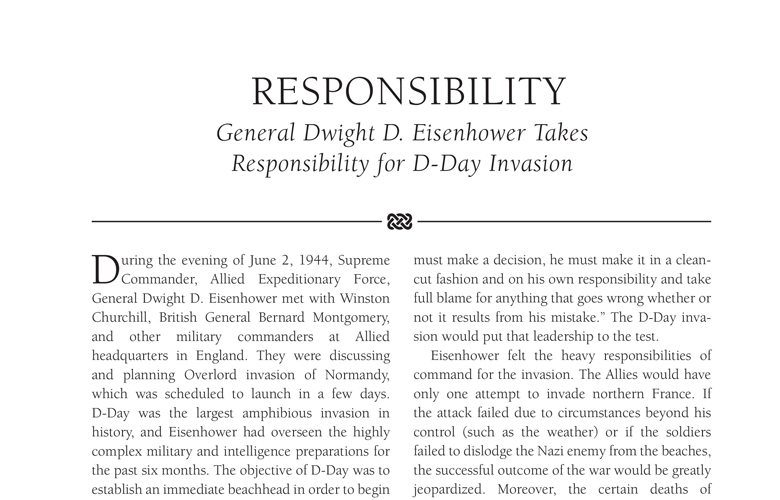 During the evening of June 2, 1944, Supreme Commander, Allied Expeditionary Force, General Dwight D. Eisenhower met with Winston Churchill, British General Bernard Montgomery, and other military commanders at Allied headquarters in England. They were discussing and planning Overlord invasion of Normandy, which was scheduled to launch in a few days. D-Day was the largest amphibious invasion in history, and Eisenhower had overseen the highly complex military and intelligence preparations for the past six months. The objective of D-Day was to establish an immediate beachhead in order to begin the liberation of Nazi-occupied France. Ultimately, the Allies would fight their way through France and into Germany, forcing Germany’s surrender in World War II.

President Franklin D. Roosevelt had good reason to choose Eisenhower to be Supreme Commander the previous December. Eisenhower had mastered the art of working well with allies and had gained valuable experience commanding the Allied invasion of Northern Africa, Sicily, and Italy. Eisenhower also followed a code of moral responsibility in leadership. He believed a leader must be “self-effacing, quick to give credit, ready to meet the other fellow more than half-way, must seek to absorb advice . . . When the time comes that he feels he must make a decision, he must make it in a clean cut fashion and on his own responsibility and take full blame for anything that goes wrong whether or not it results from his mistake.” The D-Day invasion would put that leadership to the test.

Eisenhower felt the heavy responsibilities of command for the invasion. The Allies would have only one attempt to invade northern France. If the attack failed due to circumstances beyond his control (such as the weather) or if the soldiers failed to dislodge the Nazi enemy from the beaches, the successful outcome of the war would be greatly jeopardized. Moreover, the certain deaths of thousands of young men from across America and the British Empire haunted him and caused him great anxiety.

After dinner, Eisenhower and his generals gathered in the study where they received a distressing weather report that a storm was blowing in and would delay the invasion. Eisenhower confided to his diary that he felt great stress. “Probably no one who does not have to bear the specific and direct responsibility of making the final decision as to what to do can understand the intensity of these burdens.”

Eisenhower received similar weather reports during the next two days that further postponed the attack. Eisenhower was more frustrated than ever because if the attack did not go off in the next two days, it would have to wait at least two weeks for the right combination of moonlight, tides, and weather. Much could happen in the course of the war in a two-week span, and every day the war continued brought much death and misery. With so many lives at stake, he had to be patient enough not to force the attack. But, with victory on the line, he had to be bold enough to seize any opportunity. Eisenhower tried to relax but strained under the awful burdens of command.

During the evening of June 4, the predicted storm slammed headquarters with driving wind and rain. Just as his hope was melting away, Eisenhower received a favorable weather report that would give him a small window to launch the attack. He only had half an hour in which to make the fateful decision. It was the most important decision of his life, and the course of the war hinged on it. He was quiet as he privately deliberated for several minutes. The decision was his alone to make. Finally, the Supreme Commander said,

“I am quite positive we must give the order. I don’t like it but there it is . . .I don’t see how we can do anything else.”

Eisenhower had an opportunity to revisit his decision the following morning with one final weather report and last-minute discussion with his generals. He again paced the floor and silently considered the questions for five minutes. He broke his reverie, looked up, and said,

Eisenhower wrote out a message during the day that demonstrated his character. In an incredible act of moral courage, he took responsibility in case the invasion failed. He could have blamed a thousand factors beyond his control, but instead he shouldered the entire responsibility

“Our landings in the Cherbourg-Havre area have failed to gain a satisfactory foothold and I have withdrawn the troops. My decision to attack at this time and place was based upon the best information available. The troops, the air, and the Navy did all that bravery and devotion to duty could do. If any blame or fault attaches to the attempt it is mine alone,”

During the evening before the attack, he visited with the troops of the 101st Airborne, looked them in the eye, spoke with them, learned their names, and bolstered their morale. Eisenhower also sent a message to all of the invading Allied forces to encourage them as they prepared assault German defenses. The leader of the Allied forces of the free world did not shrink from his duty and responsibility of leadership.

On June 6, 1944, the invasion succeeded in establishing a beachhead for Allied troops. Eisenhower did not have to publish the message in his pocket, but he still felt the awful responsibility of every soldier who died invading France to destroy the Nazi scourge. His assistant, Lt. Gen. Walter Be dell Smith, finally understood the awesome responsibility of command that spring. “I never realized before the loneliness and isolation of a commander at a time when such a momentous decision has to be taken, with the full knowledge that failure or success rests on his judgment alone.” Dwight Eisenhower rose to that occasion with character and greatness.

Responsibility: To strive to know and to do what is best rather than what is most popular. To be trustworthy for making decisions in the best long term interests of the people and the tasks of which one is in charge.