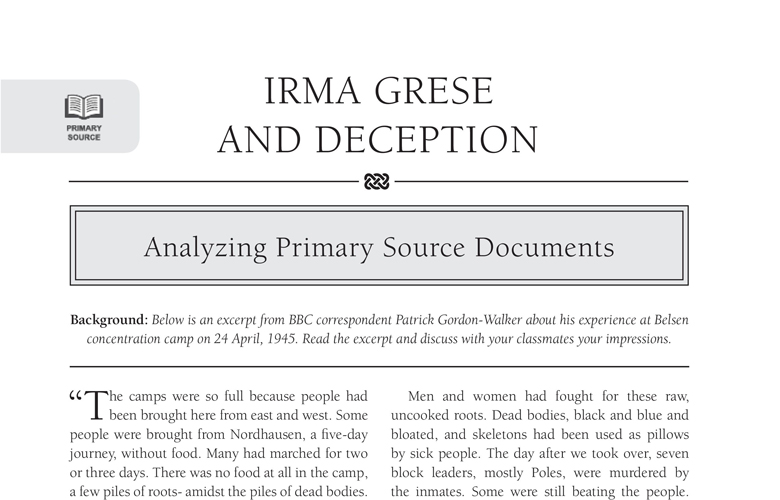 Background: Below is an excerpt from BBC correspondent Patrick Gordon-Walker about his experience at Belsen concentration camp on 24 April, 1945. Read the excerpt and discuss with your classmates your impressions.

“The camps were so full because people had been brought here from east and west. Some people were brought from Nordhausen, a five-day journey, without food. Many had marched for two or three days. There was no food at all in the camp, a few piles of roots- amidst the piles of dead bodies. Some of the dead bodies were of people so hungry that though the roots were guarded by SS-men they had tried to storm them and had been shot down then and there. There was no water, nothing but these roots and some boiled stinking carrots, enough for a few hundred people.

Men and women had fought for these raw, uncooked roots. Dead bodies, black and blue and bloated, and skeletons had been used as pillows by sick people. The day after we took over, seven block  leaders, mostly Poles, were murdered by the inmates. Some were still beating the people. We arrested one woman who had beaten another woman with a board. She quite frankly admitted the offense. We are arresting these people.

An enormous buried dump of personal jewelry and belongings was discovered in suitcases. When I went to the camp five days after its liberation, there were still bodies all around. I saw about a thousand.”

The Self-Deception of Irma Grese Essay

Virtue in Action – The Self-Deception of Irma Grese