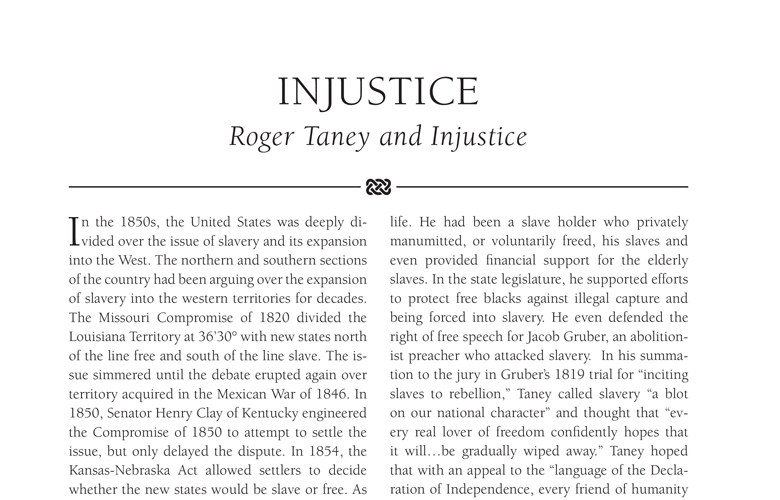 In the 1850s, the United States was deeply divided over the issue of slavery and its expansion into the West. The northern and southern sections of the country had been arguing over the expansion of slavery into the western territories for decades. The Missouri Compromise of 1820 divided the Louisiana Territory at 36’30° with new states north of the line free and south of the line slave. The issue simmered until the debate erupted again over territory acquired in the Mexican War of 1846. In 1850, Senator Henry Clay of Kentucky engineered the Compromise of 1850 to attempt to settle the issue, but only delayed the dispute. In 1854, the Kansas-Nebraska Act allowed settlers to decide whether the new states would be slave or free. As a result, pro and anti-slavery forces rushed to Kansas in order to vote on the issue, violence erupted between the two, and several people on both sides were murdered in what was called “Bleeding Kansas.” Meanwhile, southern talk of secession was in the air, and observers warned of an impending civil war. The United States faced this combustible situation when Chief Justice Roger B. Taney sat down in late February, 1857, to write an infamous opinion in the case of Dred Scott v. Sandford that would go down as a travesty of constitutional interpretation and one of the greatest injustices laid down by the Supreme Court.

Taney was a lawyer and state legislator in the slave state of Maryland who disapproved of slavery earlier in his life. He had been a slave holder who privately manumitted, or voluntarily freed, his slaves and even provided financial support for the elderly slaves. In the state legislature, he supported efforts to protect free blacks against illegal capture and being forced into slavery. He even defended the right of free speech for Jacob Gruber, an abolitionist preacher who attacked slavery. In his summation to the jury in Gruber’s 1819 trial for “inciting slaves to rebellion,” Taney called slavery “a blot on our national character” and thought that “every real lover of freedom confidently hopes that it will…be gradually wiped away.” Taney hoped that with an appeal to the “language of the Declaration of Independence, every friend of humanity will seek to lighten the galling chain of slavery.” He seemed to hold relatively enlightened views about slavery and race, and acted in the name of justice. 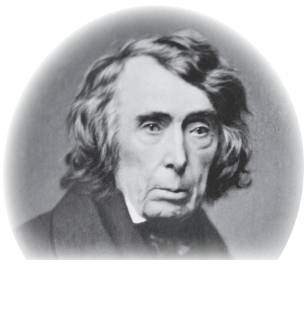 In the 1830s, Taney joined the Democratic Party and was appointed Attorney General under President Andrew Jackson. He became an advocate of states’ rights and reversed his earlier stance on the rights of slaves. Attorney General Taney offered the president an opinion on a case dealing with forcing free blacks into slavery in South Carolina. He defended the right of states to enforce their own laws and asserted in an 1832 opinion that, “The African race in the United States even when free are every where a degraded class, and exercise no political influence.” He went on, “They were not looked upon as citizens by the contracting parties who formed the Constitution,” and were “not supposed to be included by the term citizens.” It was an ominous declaration when Taney replaced the deceased John Marshall as Chief Justice of the Supreme Court in March, 1836. Over the next decade, the furor over slavery dominated national politics, though Taney scrupulously avoided public comment as the impartial Chief Justice.

Dred Scott was a slave who had been owned by different masters in the slave states of Virginia and Missouri. One of his owners, Dr. John Emerson, was an Army surgeon who was stationed at a fort in the free state of Illinois for three years and brought Scott with him. Emerson then moved to the free Wisconsin Territory, and again Scott accompanied him and even married another slave. When Emerson moved back to Missouri with his slaves and soon died, Scott sued Emerson’s widow for his freedom, based on his having lived in Illinois and Wisconsin, where slavery was prohibited. Further, Missouri’s long-standing judicial rule was “once free, always free.” Many former slaves who had returned to Missouri after living in a free state or territory had successfully sued in Missouri courts to establish their freedom. The case made its way through the Missouri and federal courts, and finally reached the Supreme Court.

Taney and the other justices heard oral arguments from the attorneys in February, 1856. The justices met in chambers and haggled over the case for months. They asked for re-argument the following December, which conveniently meant they would render a decision after the contentious 1856 presidential election. In the meantime, Taney privately expressed his political opinion that, “The South is doomed, and that nothing but a firm united action, nearly unanimous is every state can check Northern insult and Northern aggression.” He in effect supported a Union in which one race was kept in an inferior position and critics of slavery were effectively silenced. Thus, when the attorneys reargued their case in the Supreme Court chambers in the basement of the U.S. Capitol, Taney listened with these thoughts in mind.

The justices met in mid-February, 1857 to consider the case. They nearly agreed to issue a narrow legal opinion that addressed the status of a slave in a free state. However, this strategy unraveled. In a fateful move, they selected the Chief Justice to write a more expansive opinion. Taney looked at the slavery debates that wracked the country and feared that they would destroy the Union. He developed the mistaken, and somewhat arrogant, notion that the Supreme Court could settle the political issue once and for all to avert possible civil war. His political objectives outweighed his ideas about justice and natural rights, or an impartial view of the historical facts.

On the morning of March 6, Taney read the shocking opinion to the Court for nearly two hours. Taney, speaking for seven members of the Court, declared that all African-Americans— slave or free—were not U.S. citizens at the time of the Founding and could not become citizens. He asserted that the Founders thought that blacks were an inferior class of humans and “had no rights which the white man was bound to respect,” and no right to sue in federal court. This was not only a misreading of the history of the American Founding, but a gross act of injustice toward African Americans. Taney could have stopped there, but he believed this decision could end the sectional conflict over the expansion of slavery. He declared that the Missouri Compromise was unconstitutional, that Congress had no power to regulate slavery in the territories, and that slavery could become legal throughout the nation. Finally, Taney pronounced that Dred Scott, despite the years he spent in the free state and territory that allowed other slaves to claim their freedom, was still a slave.

The Dred Scott decision was not unanimous; Justices Benjamin Curtis and John McLean wrote dissenting opinions. Curtis’s painstakingly detailed research in U.S. history demonstrated that Taney was wrong on several points. First, Curtis wrote that, contrary to Taney’s assertion regarding citizenship, free African-Americans had been citizens and even voters in several states at the time of the Founding. According to Curtis, since there was no citizenship clause in the U.S. Constitution, once a state conferred citizenship, federal citizenship was automatic. Further, Curtis pointed out that by settled practice Congress did indeed have power to legislate regarding slavery. Curtis explained more than a dozen instances in which Congress had legislated with respect to slavery before the 1820 Missouri Compromise.

The Dred Scott decision was supposed to calm sectional tensions in the United States, but it worsened them as northerners expressed great outrage, and southerners doubled down on the Court’s decision that African Americans had no rights and Congress could not regulate slavery’s expansion. Indeed, the Court’s decision greatly exacerbated tensions and contributed directly to events leading to the Civil War. Leaving the debate over slavery to the people and their representatives might have averted or delayed the Civil War and settled the issue differently. After all, the people’s representatives had been debating and compromising on the issues that divided north and south ever since the Philadelphia Convention of 1787. Most historians agree, though, that once the Dred Scott decision mandated that Congress had no power to legislate regarding the expansion of slavery in the territories, thus opening the entire nation including the free states to that possibility, there were no more political options available. As President Lincoln wrote in 1860, “The tug has to come & better now than later.”

Taney’s view of American republican government was that only one race enjoyed natural rights and self-government. Abraham Lincoln continually attacked the decision in his speeches and debates. He took a different approach than Taney. Lincoln stood for a Union of natural rights for all humans and did not believe that the country could survive indefinitely “half slave, half free.” He argued that the Declaration of Independence “set up a standard maxim for free society” of self-governing individuals. If the Court’s majority gained the final say on political decisions, Lincoln thought “the people will have ceased to be their own rulers.” Justice Curtis wrote that slavery itself is “contrary to natural right.” Chief Justice Taney’s reasoning in the Dred Scott decision sought to justify laws protecting slavery, but the injustice of those laws was evident to his contemporaries.