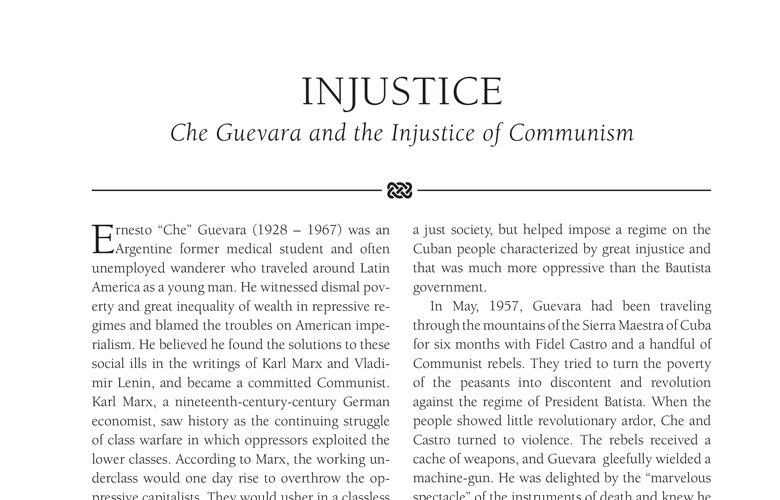 Ernesto “Che” Guevara (1928 – 1967) was an Argentine former medical student and of ten un employed wanderer who traveled around Latin America as a young man. He witnessed dismal poverty and great inequality of wealth in repressive regimes and blamed the troubles on American imperialism. He believed he found the solutions to these social ills in the writings of Karl Marx and Vladimir Lenin, and became a committed Communist.Karl Marx, a nineteenth-century-century German economist, saw history as the continuing struggle of class warfare in which oppressors exploited the lower classes. According to Marx, the working underclass would one day rise to overthrow the oppressive capitalists. They would usher in a class less society in which everyone worked and the community would meet everyone’s needs—communism.Therefore, communists such as Che believed that capitalism, private property, and the profit motive are evil. They saw the United States as the best example of capitalism run amok—cruelly creating great disparities of wealth as the few built on the backs of the beleaguered many. Che did not even like democratic regimes in Latin America because of his embrace of communism. He also had great admiration for Soviet leader, Joseph Stalin.In 1955, Guevara was living in Mexico City, where he joined Cuban revolutionaries Fide land Raul Castro in plotting to overthrow the corrupt dictatorship of Fulgencio Batista in Cuba. Ironically,Guevara sought to implement his Marxist vision for a just society, but helped impose a regime on the Cuban people characterized by great injustice and that was much more oppressive than the Bautista government.

In May, 1957, Guevara had been traveling through the mountains of the Sierra Maestra of Cuba for six months with Fidel Castro and a handful of Communist rebels. They tried to turn the poverty of the peasants into discontent and revolution against the regime of President Batista. When the people showed little revolutionary ardor, Che and Castro turned to violence. The rebels received acache of weapons, and Guevara gleefully wielded am achine-gun. He was delighted by the “marvelous spectacle” of the instruments of death and knew he had “entered a new stage” in his life as “a full-time combatant.”

Over the next few years, Che and a few dozen Marxist revolutionaries helped lead attacks on army barracks to disrupt the Batista government and seize more weapons for the revolution. In several raids, they killed scores and routinely executed prisoners without trials. Che even personally ordered the summary execution of several rebels in his own band whom he deemed as insufficiently loyal. In addition, he killed several peasants accused of supporting the government. Later explaining his principles of guerilla warfare as he sought to follow the teachings of Marx and Lenin, Guevara wrote,“We must come to the inevitable conclusion that the guerrilla fighter is a social reformer, that he takes up arms responding to the angry protest of the people against their oppressors, and that he fights in order to change the social system that keeps all his unarmed brothers in ignominy and misery.” The murderous “justice” of Castro and Guevara was carried out for the good of the revolution.

Che and Castro discovered that there was no strong revolutionary fervor among Cuba’s peasantryor among the urban workers. Far from being opposed to capitalism, these people aspired to earn the advantages of free enterprise themselves.They saw private property as the solution to their problems, not the evil backbone of a corrupt system.Ignoring the fact that most Cubans were opposed to a Communist revolution, they believed that they must serve as a leaders of a revolutionary vanguard of intellectuals who liberated a people who had not yet developed a “class consciousness.” They would impose the Marxist revolution from above.

On January 1, 1959, Batista fled to the Dominican Republic while the rebels marched on the outskirts of the capital of Havana. There were those who rejoiced at the end of the corrupt Batista dictatorship; though it was not as brutal as Communist propaganda would portray it.Unfortunately, the incoming regime did not us her in freedom and prosperity, but rather remark able injustice that belied its seemingly noble aims. Che immediately started signing death warrants fora dozen policemen of the regime because “they had committed crimes against the people.” A few days later, Castro and Che rode triumphantly in a tank and seized power in Cuba. Their communi stregime would be more repressive and destructive of a just government and civil society than Batista’s government.

The communist government quickly imposed its form of revolutionary justice that destroyed the rule of law. Che presided over “show trials”that mocked real justice and executed at least 550 members of the old regime. The Communists lined up many “enemies” and machine-gunned them to death. They also held a public spectacle in the sports stadium in which many high-ranking officials were summarily found guilty and executed before cheering crowds. Untold hundreds of “war criminals” associated with the Batista government were killed across Cuba over the next few months.“ Counter-revolution” was declared a crime punishable by death and “enemies of the state,” very broadly defined, were hunted down.

In the coming year, Che and Castro established a communist state that destroyed individual liberties,and economic and political justice. Che headed an agency for agrarian reform, which would confiscate all sugar plantations and cattle ranches for the“nation” and result in the wholesale government violation of property rights. The government also seized all rental properties and banned ownership of more than one house. Though Che had little economic or business knowledge, Castro appointed him to head an industrial agency and the national bank. However, Che and Castro focused on nationalizing U.S. oil installations (and canceling$50 million of debt owed to those oil companies),American sugar properties, all banks, industrial and transport businesses, and 166 other American companies. All unions, which had been active under the Bautist a government, were outlawed except the government-sponsored Communist one.

From his position in the Castro government,Che helped enforce Communist control over Cuban civil society and destroy freedom of thought. The government shut down all newspapers as it cracked down on freedom of the press and imposed absolute control over the media. The government also took over universities, and Che informed students and professors at the universities in Santiago that the government would impose the Marxist curriculum and determine the career choices of students for the good of the society. Che also created a Marxist political indoctrination program for the army which would now be a “people’s army” to defend itself against all “counter-revolution.” Che contributed to the systematic destruction of any civic association that could promote a healthy society. The communist regime persecuted the Catholic Church, nationalizing Catholic schools,banning Catholic publications, and deporting hundreds of priests. The supposed “justice” of revolutionary Marxist ideology became nothing more than brainwashing and thought-control.

Whereas Fidel Castro was content to be the dictator of the Cuban Communist government, Che de voted his life to spreading Marxist revolutions throughout Latin America. He praised Marxist revolutions in Africa and Asia, and dreamed of “two,three…many Viet nams.” In 1967, he was killed by the U.S. Special Forces-trained Bolivian Army while supporting the revolutionary movement in that country.

Since the 1960s, Che has remained a fashionable icon as a radical hero. Young people wear shirts adorned with his image, which they have purchased from the great symbols of capitalism, suburban shopping malls. These people think that Che is a hero because they are ignorant of the history of his murderous regime and the dangers of the Marxist ideology he espoused.

Injustice: Che Guevara and the Injustice of Communism Essay

Discussion Guide – Che Guevara and the Injustice of Communism

Virtue in Action – Che Guevara and the Injustice of Communism

Injustice Worksheet – Che Guevara and the Injustice of Communism