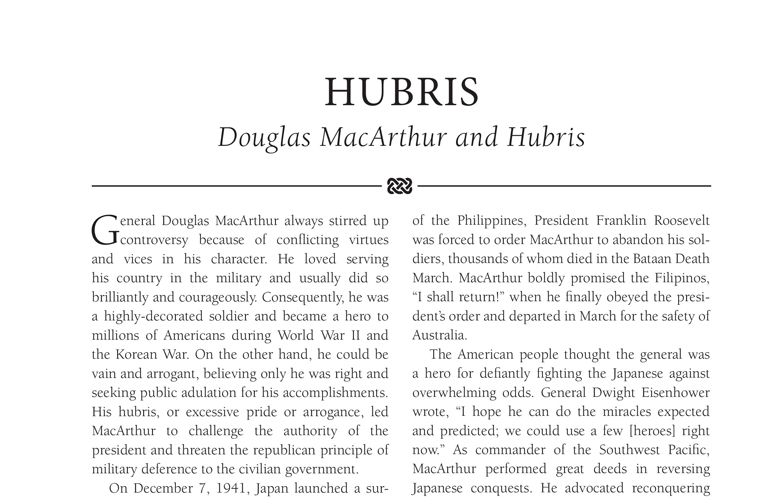 General Douglas MacArthur always stirred up controversy because of conflicting virtues and vices in his character. He loved serving his country in the military and usually did so brilliantly and courageously. Consequently, he was a highly-decorated soldier and became a hero to millions of Americans during World War II and the Korean War. On the other hand, he could be vain and arrogant, believing only he was right and seeking public adulation for his accomplishments. His hubris, or excessive pride or arrogance, led Mac Arthur to challenge the authority of the president and threaten the republican principle of military deference to the civilian government.

On December 7, 1941, Japan launched a surprise attack on Pearl Harbor, the Philippines, American Midway, Wake and Guam Islands, British Hong Kong, Malaya, and other Pacific targets. This was an important step in Japan’s strategy to rapidly build a large Pacific empire. General MacArthur had attempted to prepare the Philippines for an attack, but within a few weeks the Japanese army routed his overwhelmed forces all the way to the Bataan Peninsula. Even though MacArthur bravely endured air attacks on the island fortress of Corregidor, his men satirized him as “Dugout Doug.” American losses continued in the Philippines as the Japanese seized Manila in January. By February, knowing he could not afford to have General MacArthur captured as the Japanese took possession of the Philippines, President Franklin Roosevelt was forced to order MacArthur to abandon his soldiers, thousands of whom died in the Bataan Death March. MacArthur boldly promised the Filipinos, “I shall return!” when he finally obeyed the president’s order and departed in March for the safety of Australia.

The American people thought the general was a hero for defiantly fighting the Japanese against overwhelming odds. General Dwight Eisenhower wrote, “I hope he can do the miracles expected and predicted; we could use a few [heroes] right now.” As commander of the Southwest Pacific, MacArthur performed great deeds in reversing Japanese conquests. He advocated reconquering the Philippines both because he thought it was strategically sound and because he wished to remove the perception of personal dishonor from his humiliating exit. In 1944, MacArthur invaded the Philippines with the second largest amphibious force after the D-Day invasion in Normandy. MacArthur bravely went onto the most dangerous beach with reporters in tow for photographs. He soon proclaimed “I have returned! “This expression reflected his view that he was the guardian of the Philippines and had pressed the Allied command and President Roosevelt to rescue the Filipinos from Japanese domination.

However, MacArthur could be imperious and disrespectful towards his fellow commanders and even the president. He strutted around in a signature leather jacket, Field Marshall cap, sunglasses, and corncob pipe. He struggled with other American generals and admirals over command, strategy, and supplies, though he made significant contributions to the eventual Allied victory in World War II. After a meeting in which MacArthur was disrespectful with the president, Roosevelt stated, “In all my life nobody has ever talked to me the way MacArthur did.” In short, his hubris and desire for military glory often overshadowed his real accomplishments. Nevertheless, MacArthur continued to provide important service to the United States by supervising the reconstruction of Japan following the war.

When Communist North Korea’s army crossed the 38th Parallel in a surprise invasion of South Korea in June, 1950, President Harry Truman named MacArthur the supreme commander of the allied forces under the authority of the United Nations (UN). All of the contradictions in his character came to the fore. After the North Koreans pushed allied forces south across the Korean peninsula to a tiny pocket called the Pusan Perimeter, MacArthur launched a brilliant amphibious landing at Inchon behind the North Korean forces. MacArthur went on the offensive and his armies drove northward again, across the 38th Parallel with explicit authorization from the UN and the approval of President Harry Truman. Indeed, the Joint Chiefs of Staff (JCS) informed MacArthur that, “Your military objective is the destruction of the North Korea armed forces.” In late September, the Secretary of Defense, George Marshall, informed him, “We want you to feel unhampered strategically and tactically to proceed north of the 38th Parallel.” Therefore, MacArthur felt empowered to pursue the enemy through North Korea to the Yalu River, which was the border the Communist China. Truman’s policy objective was to demonstrate the United States and United Nations commitment to protect the integrity of South Korea, without antagonizing the government of Communist China. MacArthur viewed this strategy of limited war with disdain, and publicly criticized the president’s approach, maintaining that the Korean conflict was the best opportunity the United States would have to stand up against communist powers. MacArthur’s position was that the United Nations force should press its advantage by annihilating Chinese forces in North Korea and bombing targets inside Manchuria. His hubris strained relations with the civilian authorities as he expected everyone, including the commander-in chief, to yield to him.

As his army marched northward, MacArthur was annoyed to be pulled from the war zone when summoned by the president to an election-year meeting on Wake Island, where MacArthur would report on the progress of the war and Truman would personally clarify the difference between a general and a commander-in-chief. The irate general deliberately snubbed Truman several times during the conference. MacArthur met Truman at his plane and offered a handshake instead of greeting the president with a salute when he stepped off the plane. During private and public meetings, MacArthur could barely hide his contempt for Truman and gave rude answers to his questions. Finally, the general turned down a lunch invitation and departed.

MacArthur’s drive to the north pushed the North Korean army past the point established by the UN as the northernmost line he was authorized to attack. When the Joint Chiefs expressed their concern and also ordered him not to bomb targets too close to the Chinese border, MacArthur shot back a blistering and insubordinate reply against their timidity. The Chinese then sent hundreds of thousands of troops against the allied forces in October. MacArthur responded by attacking the bridges on the Yalu, and again the JCS ordered him to stop. The general admonished his superiors for issuing orders he believed threatened the destruction of his army. Meanwhile, U.S. forces heroically fought desperate battles in bitter cold and barely repulsed the massive Chinese invasion, though the U.S. forces were slowly forced to retreat all the way back to South Korea.

MacArthur was embarrassed by the defeat since he had recently predicted that the troops would be coming home for Christmas. He gave a media interview in which he blamed the defeat on the handicaps placed upon him by the administration. MacArthur also held a press conference and predicted a “savage slaughter” if he were not given greater leeway over the rules of engagement. A few weeks later, he threatened to cross the 38th Parallel again into North Korea (contrary to orders) and offered to meet with the Chinese commander to offer his own terms for a cease-fire (thereby by passing the diplomatic efforts of the administration).Frustrated with the administration’s pursuit of a limited-war strategy geared toward a ceasefire, the general publicly promised to pursue the enemy anywhere in Korea and roundly defeat him. Although his military views were not far from the Allied commanders and President Truman, MacArthur believed too much in his own greatness, and his vanity led him to rank insubordination

The last straw came when MacArthur wrote a letter to the Speaker of the House criticizing the administration and asserting that, “There is no substitute for victory.” President Truman immediately relieved MacArthur of command. MacArthur was deeply insulted when he learned about his dismissal on the radio rather than through formal channels. MacArthur felt vindicated when the American people supported him and gave him a hero’s welcome in the United States. He addressed Congress and tens of millions of people in a tearful farewell that was broadcast on television and radio.He reviewed his career, criticized American strategy in Korea, and dramatically ended the speech with the phrase, “Old soldiers never die, they just fade away.” Surprisingly, for a general who had exhibited such vanity in his career, he did gradually “fade away” from American public life before he died in 1964.

General MacArthur dedicated his life to public service in the military and was a heroic commander. However, he was often self-serving and self-promoting. He was consistently arrogant in dealing with his commander-in-chief, who has constitutional authority over the military, and superior officers. He was often insubordinate and threatened to upset the proper respect accorded the civilian authorities by members of the military as established by precedent since George Washington. Australian Field Marshall Sir Thomas Blamey said of MacArthur, “The best and the worst things you hear about him are both true.”

Hubris: To have excessive self-pride, vanity, and arrogance that usually leads to a tragic fall.