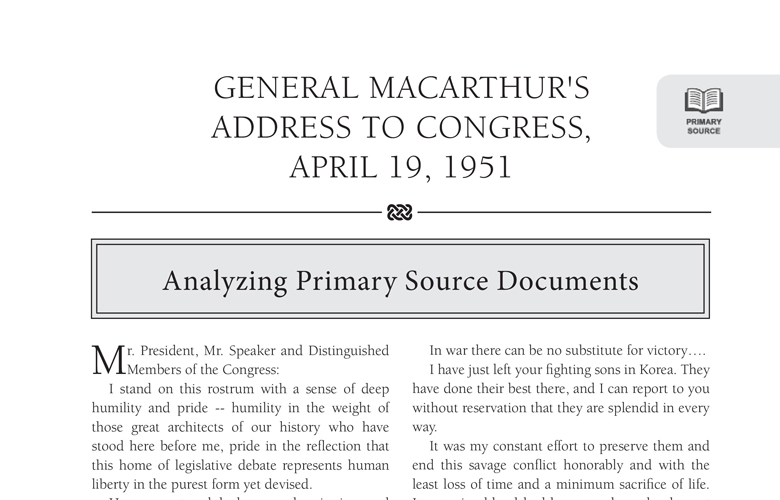 Mr. President, Mr. Speaker and Distinguished Members of the Congress:

I stand on this rostrum with a sense of deep humility and pride — humility in the weight of those great architects of our history who have stood here before me, pride in the reflection that this home of legislative debate represents human liberty in the purest form yet devised.

Here are centered the hopes and aspirations and faith of the entire human race.

I do not stand here as advocate for any partisan cause, for the issues are fundamental and reach quite beyond the realm of partisan considerations. They must be resolved on the highest plane of national interest if our course is to prove sound and our future protected.

I trust, therefore, that you will do me the justice of receiving that which I have to say as solely expressing the considered viewpoint of a fellow American.

I address you with neither rancor nor bitterness in the fading twilight of life, with but one purpose in mind: to serve my country….

But once war is forced upon us, there is no other alternative than to apply every available means to bring it to a swift end. War’s very object is victory, not prolonged indecision.

In war there can be no substitute for victory….

I have just left your fighting sons in Korea. They have done their best there, and I can report to you without reservation that they are splendid in every way.

It was my constant effort to preserve them and end this savage conflict honorably and with the least loss of time and a minimum sacrifice of life. Its growing bloodshed has caused me the deepest anguish and anxiety. Those gallant men will remain often in my thoughts and in my prayers always.

I am closing my 52 years of military service. When I joined the Army, even before the turn of the century, it was the fulfillment of all of my boyish hopes and dreams. The world has turned over many times since I took the oath at West Point, and the hopes and dreams have all since vanished, but I still remember the refrain of one of the most popular barracks ballads of that day which proclaimed most proudly that old soldiers never die; they just fade away. And like the old soldier of that ballad, I now close my military career and just fade away, an old soldier who tried to do his duty as God gave him the light to see that duty.

General MacArthur told members of Congress, “I stand on this rostrum with a sense of deep humility and pride…” Analyze the address and explain whether you believe humility or pride takes precedence in this particular speech. Use specific examples.