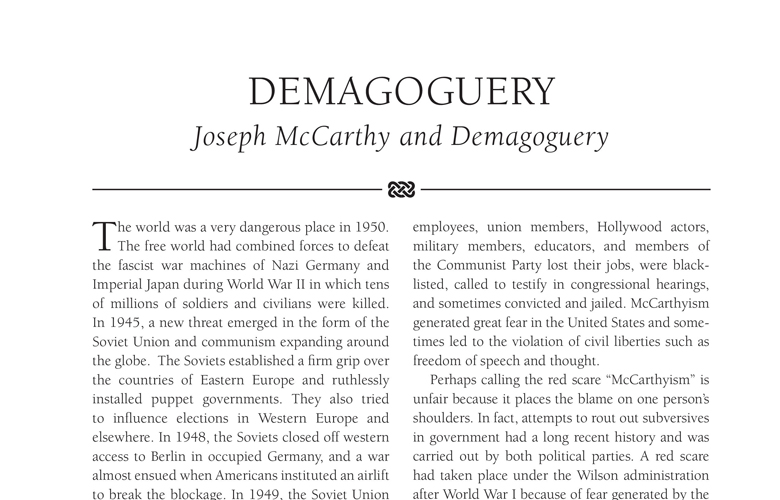 The world was a very dangerous place in 1950.The free world had combined forces to defeat the fascist war machines of Nazi Germany and Imperial Japan during World War II in which tens of millions of soldiers and civilians were killed.In 1945, a new threat emerged in the form of the Soviet Union and communism expanding around the globe. The Soviets established a firm grip over the countries of Eastern Europe and ruthlessly installed puppet governments. They also tried to influence elections in Western Europe and elsewhere. In 1948, the Soviets closed off western access to Berlin in occupied Germany, and a war almost ensued when Americans instituted an airlift to break the blockage. In 1949, the Soviet Union exploded an atomic bomb that set off a nuclear arms race, and Mao Zedong established a communist dictatorship in China. This Cold War created great tensions between the two superpowers and caused great fear in the United States of war, communist expansion, and nuclear annihilation.

During the early 1950s, Joseph McCarthy, a Senator from Wisconsin, became well-known for his rousing Americans to fear that Communist subversives were spying for the Soviet Union and damaging the American fight against Communism around the globe. McCarthy’s name has become synonymous with “McCarthyism,”which was characterized as a “witch-hunt”or “red scare” against Communists in America.Thousands of government employees, union members, Hollywood actors,military members, educators, and members of the Communist Party lost their jobs, were blacklisted, called to testify in congressional hearings,and sometimes convicted and jailed. McCarthy is generated great fear in the United States and sometimes led to the violation of civil liberties such as freedom of speech and thought.

Perhaps calling the red scare “McCarthyism” is unfair because it places the blame on one person’s shoulders. In fact, attempts to rout out subversives in government had a long recent history and was carried out by both political parties. A red scare had taken place under the Wilson administration after World War I because of fear generated by the communist Russian Revolution. More recently,Congress organized the House Un-American Activities Committee (HUAC) in 1938 which held hearings about communist subversion, passed the Hatch Act (1939) that banned Communists from working in government jobs, and passed the Smith Act (1940) which banned political groups advocating the violent overthrow of the United States. In 1947, President Harry Truman signed an Executive Order creating a loyalty review board to investigate suspected subversives in the federal government. Truman vetoed the Internal Security Act,or McCarran Act (1950),which forced Communist Party members to register with the government, and large majorities in Congress overrode the veto. FBI Director J. Edgar Hoover and his agents investigated communist subversives in the United States.But, if McCarthy did not create the climate of fear,he contributed to it and benefitted politically.

When McCarthy and other Americans looked at the events during the start of the Cold War, they feared that communist subversives threatened American national security from within. Their fears were legitimate and justified by several acts of real subversion. The cases of Klaus Fuchs,the Rosenbergs, and Alger Hiss demonstrated that Americans in high positions of government were spying for the Soviet Union. The national government investigated the treasonous activities according to the rule of law and preserved the constitutional principles of due process and trial by jury. Several espionage rings for the Soviets were uncovered, and Manhattan Project scientist Klaus Fuchs was arrested for selling atomic secrets to the Soviets. In addition, Julius and Ethel Rosenberg were convicted and executed for participating in a Soviet spy ring. Most famously, spy Alger Hiss was convicted of perjury based upon evidence hidden in a pumpkin by accuser, Whitaker Chambers.

McCarthy was a relatively unknown until he delivered a speech in Wheeling, West Virginia,on February 9, 1950, warning of communist subversion and treason in the State Department.He said he had a list of alleged Communists who worked in the State Department. When the press gave him tremendous attention for his accusations, McCarthy continued the attack. He sincerely believed that Communists and spies were infiltrating the federal government—and he was correct that spies endangered national security—but he was irresponsible with the charges he leveled. The number of spies on his supposed list kept changing, and he began to lie and exaggerate for the media attention and increased political power.

The Senate Foreign Relations Committee created a subcommittee to investigate McCarthy’s allegations. McCarthy browbeat and bullied witnesses who appeared before the Tydings Committee. Anyone who pleaded the Fifth Amendment (the right to remain silent) and refused to answer questions was accused of be ingguilty of communist beliefs, party membership,or subversion. The outbreak of the Korean War,in which communist North Korea invaded South Korea in June 1950, added to the tense political climate. Finally, the committee report concluded that McCarthy’s accusations were “a fraud and a hoax,” but he continued his crusade.

McCarthy’s attack on communist spies took a reckless turn when he accused the World War II Army Chief of Staff and later Secretary of State George C. Marshall of “invariably serving the world policy of the Kremlin.” A cross-section of liberal and conservative Americans was outraged by McCarthy’s charges against Marshall, and many in the media began calling the senator a demagogue.When anyone attacked him, however, McCarthy called them a communist. McCarthy was trying to use the popular anti-communist issue for his own political fame and power. It increasingly seemed as if he were pursuing his own self-interest rather than protecting the public or even telling the truth. He was also drinking heavily and showed increasing signs of impaired judgment. McCarthy’s irresponsible charges undermined the legitimate anti-communist cause in the United States that advocated strength against the Soviet Union and uncovering spies in the government.

FBI Director Hoover and President Dwight Eisenhower both distanced themselves from McCarthy and worked against him behind-the scenes. “I won’t go down into the gutter with that guy,” Eisenhower said. The president also asserted“it is imperative that we protect the basic rights of loyal American citizens” while honestly combating real subversion. CIA Director Allen Dulles refused to let his employees testify at McCarthy’s hearings. Still, McCarthy sought the spotlight wherever he could find it, making wild accusations in committee hearings, and trying to block the nomination of an anti-communist appointee at the State Department.

McCarthy’s final downfall occurred in 1954 when he investigated lax security in the Army for contributing to communist subversion. He made horrific allegations, at one point accusing an Army general who had fought heroically at Normandy on D-Day of covering-up communist spies. When one of his aides was drafted, McCarthy and his staff tried to get special privileges and assignments for him. In June, while being questioned in hearings to determine his role in his staff member’s special privileges, McCarthy accused the lawyer of sheltering a young lawyer in his law firm. McCarthy called the young man a communist. The lawyer angrily shot back: “Little did I dream you could be so reckless and so cruel as to do an injury to that lad….Let us not assassinate this lad further, Senator. You have done enough. Have you no sense of decency, sir, at long last? Have you left no sense of decency.”

A few months later, the Senate voted to censure Joseph McCarthy by a vote of 67 to 22. Within a few years, the senator died of complications resulting from severe alcoholism. While the Cold War and fear of communism continued for decades, McCarthy seemed a symbol of the hysteria during the early 1950s and used the issue for this own interest. The demagogue was a tragic figure who subverted constitutional principles of due process and created an unhealthy civic culture of fear and distrust.