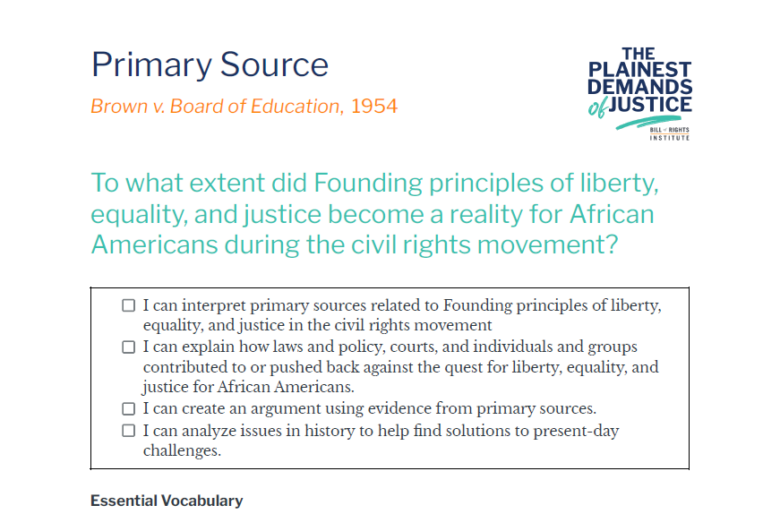 Guiding Question: To what extent did Founding principles of liberty, equality, and justice become a reality for African Americans during the civil rights movement?

The Supreme Court had endorsed the segregation principle of “separate but equal” in Plessy v. Ferguson, 1896. While Black Americans were challenging segregation through demonstrations at the local level, the NAACP pursued a legal strategy intended to overturn segregation in public schools. In Brown v. Board of Education, 1954, the court overturned the “separate but equal” doctrine of Plessy as it applied to public schools. In a unanimous decision, the court determined that segregation was “inherently unequal” and violated the Equal Protection Clause of the Fourteenth Amendment.

Today, education is perhaps the most important function of state and local governments. Compulsory [mandatory] school attendance laws and the great expenditures for education both demonstrate our recognition of the importance of education to our democratic society. It is required in the performance of our most basic public responsibilities, even service in the armed forces. It is the very foundation of good citizenship. Today it is a principal instrument in awakening the child to cultural values, in preparing him for later professional training, and in helping him to adjust normally to his environment. In these days, it is doubtful that any child may reasonably be expected to succeed in life if he is denied the opportunity of an education. Such an opportunity, where the state has undertaken to provide it, is a right which must be made available to all on equal terms. . . .

To separate them from others of similar age and qualifications solely because of their race generates a feeling of inferiority as to their status in the community that may affect their hearts and minds in a way unlikely ever to be undone . .

We conclude that, in the field of public education, the doctrine of “separate but equal” has no place. Separate educational facilities are inherently unequal. Therefore, we hold that the plaintiffs and others similarly situated for whom the actions have been brought are, by reason of the segregation complained of, deprived of the equal protection of the laws guaranteed by the Fourteenth Amendment . . .