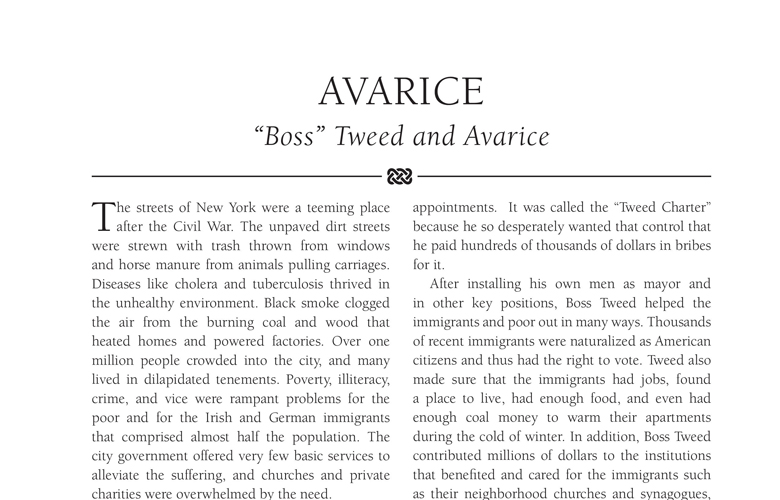 The streets of New York were a teeming place after the Civil War. The unpaved dirt streets were strewn with trash thrown from windows and horse manure from animals pulling carriages. Diseases like cholera and tuberculosis thrived in the unhealthy environment. Black smoke clogged the air from the burning coal and wood that heated homes and powered factories. Over one million people crowded into the city, and many lived in dilapidated tenements. Poverty, illiteracy, crime, and vice were rampant problems for the poor and for the Irish and German immigrants that comprised almost half the population. The city government offered very few basic services to alleviate the suffering, and churches and private charities were overwhelmed by the need.

By the mid-1850s, “Boss” William Magear Tweed(1823 – 1878) was one of the leading politicians in New York City. He headed the Tammany Hall political machine, which controlled Democratic Party and most of the votes. He had spent a life time in public service and held a wide variety of local positions including volunteer firefighter, Board of Education, Board of Supervisors, and state senator. Most importantly, in 1860 he was named the “grand sachem” of Tammany Hall and was in control of the political machine. In 1870, the state legislature granted New York City anew charter that gave local officials, rather than those in the state capital in Albany, power over local political offices and appointments. It was called the “Tweed Charter” because he so desperately wanted that control that he paid hundreds of thousands of dollars in bribes for it.

After installing his own men as mayor and in other key positions, Boss Tweed helped the immigrants and poor out in many ways. Thousands of recent immigrants were naturalized as American citizens and thus had the right to vote. Tweed also made sure that the immigrants had jobs, found a place to live, had enough food, and even had enough coal money to warm their apartments during the cold of winter. In addition, Boss Tweed contributed millions of dollars to the institutions that benefited and cared for the immigrants such as their neighborhood churches and synagogues, hospitals, orphanages, and charities. Immigrants in New York were grateful for the much-needed services from the city and private charities. The Tweed Ring seemed to be creating a healthy society. In overwhelming numbers immigrants happily voted for the Democrats who ran the city.

However, all was not well in New York. The “Tweed Ring” was corruptly raking in millions of dollars in graft and skimming off the top. Tweed doled out thousands of jobs as patronage and he expected favors, bribes, and kickbacks in return. Massive building projects such as new hospitals, elaborate museums, marble courthouses, paved roads, and the Brooklyn Bridge had millions of dollars of padded costs added that went straight to Boss Tweed and his cronies. They also gobbled up massive amounts of real estate, owned the printing company that did official city business such as ballots, and received large payoffs from railroads. Soon, Tweed owned an extravagant Fifth Avenue mansion and an estate in Connecticut, gave lavish parties and weddings, and owned diamond jewelry worth tens of thousands of dollars. In total, the Tweed Ring brought in an estimated $50 to $200 million in corrupt money. Boss Tweed’s avarice knew few boundaries.

The corruption in New York City government, however, went far beyond greed to cheapen the rule of law and degrade a healthy civil society. Most people in local government received their jobs due to patronage rather than merit and talent. The Tweed Ring also manipulated elections in a variety of ways. They hired people to vote multiple times, and even had sheriffs and temporary deputies protect them while doing so. They stuffed ballot boxes with fake votes and bribed or arrested election inspectors who questioned their methods. Sometimes, they simply ignored the ballots completely and falsified election results. Tammany candidates often received more votes than eligible voters in a district. In addition, the ring used intimidation and street violence by hiring thugs or crooked cops, and received payoffs from criminal activities they allowed to flourish.

I don’t care who does the electing as long as I get to do the nominating.

In the end, Boss Tweed’s greed was too great, and his exploitation was too brazen. The New York Times exposed the rampant corruption, and the cartoons of Thomas Nast in Harper’s Weekly lampooned the Tweed Ring for its illegal activities. In October 1871, Tweed was arrested and indicted shortly thereafter. He was tried in 1873, found guilty of forgery and larceny, and sentenced to twelve years in prison. He escaped in disguise to Cuba and thence to Spain in 1875 by paying$60,000 in bribes, but he was recaptured, returned to New York, and died in jail in 1878.