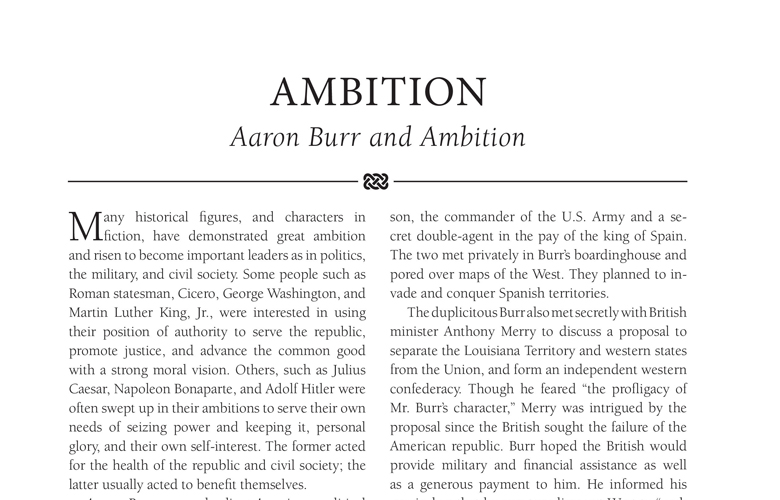 Many historical figures, and characters infiction, have demonstrated great ambition and risen to become important leaders as in politics,the military, and civil society. Some people such as Roman statesman, Cicero, George Washington, and Martin Luther King, Jr., were interested in using their position of authority to serve the republic,promote justice, and advance the common good with a strong moral vision. Others, such as Julius Caesar, Napoleon Bonaparte, and Adolf Hitler were often swept up in their ambitions to serve their own needs of seizing power and keeping it, personal glory, and their own self-interest. The former acted for the health of the republic and civil society; the latter usually acted to benefit themselves.

Aaron Burr was a leading American political figure in the early republic and was not immune to the vice of self-seeking ambition. On July 11,1804, Vice President Burr faced off against his political nemesis, Alexander Hamilton, on a field in Wee hawken, N.J. for a duel. Hamilton had called Burr an unprincipled and dangerous man, and Burr demanded satisfaction for the insult. The two met in a duel, and Burr killed Hamilton. Burr went into hiding to escape charges of dueling and murder in New York and New Jersey. Nevertheless, he had the audacity to preside over the U.S.Senate for the impeachment trial of a Supreme Court justice, Samuel Chase,while himself evading the law and justice.

During that summer and fall, Burr met with traitor General James Will kin son, the commander of the U.S. Army and a secret double-agent in the pay of the king of Spain.The two met privately in Burr’s boardinghouse and pored over maps of the West. They planned to invade and conquer Spanish territories.

The duplicitous Burr also met secretly with British minister Anthony Merry to discuss a proposal to separate the Louisiana Territory and western states from the Union, and form an independent western confederacy. Though he feared “the profligacy of Mr. Burr’s character,” Merry was intrigued by the proposal since the British sought the failure of the American republic. Burr hoped the British would provide military and financial assistance as well as a generous payment to him. He informed his son-in-law that he was traveling out West to “seek another country.” Burr’s ambition was leading him to become involved with dangerous intrigues against his country.

The plotting vice-president received great praise for dignity and impartiality as he presided over the impeachment trial of Justice Chase. Burr then gave a tearful farewell to the Senate since he was being replaced as vice-president. He had engaged in machinations against Jefferson in the 1800 presidential election even though they were the same party.Eventually, the House broke at ie between the two and selected Jefferson president.Jefferson witnessed Burr’s self-serving political ambition and decided to dump his vice-president. Nevertheless, Burr told his colleagues the Senate, is a sanctuary and a citadel of law, or order,or liberty—and it is here—it is here—in this exalted refuge—here, if anywhere will resistance be made to the storms of popular frenzy and the silent arts of corruption; and if the Constitution be destined ever to perish by the sacrilegious hands of the demagogue or the usurper, which God avert, its expiring agonies will be witnessed on this floor.

For the next two months, Burr’s extensive travels in the West ironically fulfilled his own warnings about the threat to the republic by a dangerous traitor. He visited shipyards, military suppliers,banks, forts, and met with wealthy individuals and with General Andrew Jackson. Many of the meetings bore fruit, winning promises of financial and military support. Burr then rode down the Mississippi River and reached his final destination of New Orleans. He forged ties with the Mexican Association, a group of powerful individuals who shared his dream of liberating Mexico from Spanishimperial rule. In addition, Burr learned that the city presently had more than fifty French cannon. Burr returned to the East with the groundwork laid to launch his plan. In all of this plotting, Burr saw himself as the leader of the expedition and any new country that was created.

President Jefferson heard various rumors and received direct warnings about Burr’s machinations in the West. Burr returned to the nation’s capital and actually met with the president to demand a government position but was spurned. In August 1806, Burr headed back out to the West to accomplish his shadowy enterprise. He was frustrated in achieving his aims at several points.Burr was able to recruit a few dozen people to join him as a military force but not the thousand he believed he could raise. In addition, he tried to gather the boats and the weapons for the plot with mixed success. Burr’s design was unraveling fast.

James Wilkinson, like many plotters in a conspiracy, turned on Burr and warned New Or leans, the Spanish, and President Jefferson in order to keep in the good and generous graces of those who paid him. Wilkinson went to New Or leans to bolster its defenses and secure the artillery in case of Burr’s attack. Governor Clai borned eclared martial law and arrested a few suspected conspirators. Jefferson issued a proclamation warning any Americans against participating in the Burr conspiracy. Federal prosecutors then seized Burr and sought to indict him with grand juries but they determined there was not enough direct evidence. Nevertheless, officials in several states seized the boats and supplies of the conspiracy.Finally, the governor of the Mississippi Territory had Burr’s followers arrested. Burr fled from authorities in disguise and was eventually tracked down, arrested, and brought back to Richmond,Virginia for trial. The charge was treason.

Supreme Court Chief Justice John Marshall presided over the trial of former Vice President Aaron Burr for treason. Marshall was an impartial justice but had supported the Federalist Party.His cousin, President Thomas Jefferson, was a leader of the Democratic-Republican Party, and the two struggled over the Burr trial. Jefferson was personally affronted by Burr’s interference with his administration’s diplomacy with Spain and became heavily involved in the case. The president did everything in his power to pressure Marshall to return a guilty verdict.

The Framers of the Constitution believed it was important to use a specific and exacting definition of the crime of treason because of the seriousness of the crime. Article III, clause 3 of the Constitution read, “Treason against the United States, shall consist only in levying War against them, or in adhering to their Enemies, giving them Aid and Comfort.No Person shall be convicted of Treason unless on the Testimony of two Witnesses to the same overt Act, or on Confession in open Court.” Marshall eventually decided that the evidence presented by federal prosecutors did not meet the constitutional standard of treason and acquitted Burr.

Aaron Burr may have been acquitted in a court of law, but that did not mean that he was innocent of ambitious, unpatriotic machinations that might have split the new nation into separate confederacies with himself as the emperor of a western confederacy. Many Founders agreed that he was an unprincipled character only interested in his own power and ambitions. They thought him an American version of Cat a line, a Roman senator who launched a conspiracy to overthrow the Roman Republic. The Founders believed serving the republic was a noble virtue, while pursuing only one’s narrow self-interest was a lowly vice.

Ambition To be driven by self-interest while pursuing power and fame for yourself rather than serving the republic or the good of others.